Home > Women want closure of wine shop, say it's threat to their safety

Women want closure of wine shop, say it's threat to their safety 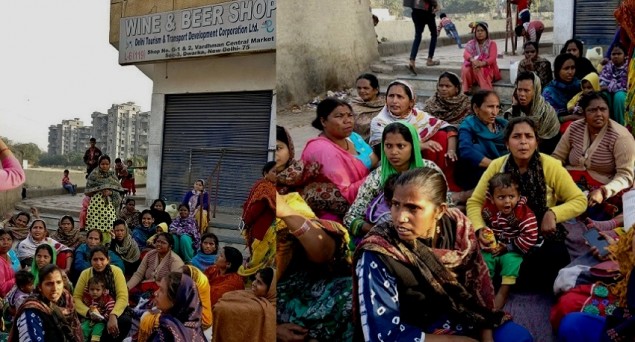 New Delhi, Feb 18: While the central and state governments are campaigning to make Delhi safer for women, some 80 women have been holding sit-in here for seven days protesting against a state entity that they say have longed posed threat to their safety, but none from the two governments in the National Capital have come out to hear them.

In the Sector 3 of Dwarka area in West Delhi, several incidents from eve-teasing to molestation to domestic violence have been reported in the recent past. For all this, the protestors hold the entity - a government-run wine shop - responsible and so they demand its closure. They also say that the shop violates the neighbourhood norms of the government itself - the shop is located within 60-70 meters of a government school.

The concern of the agitating women is that the wine shop of Delhi Tourism & Transport Development Corporation Ltd. is very close to the Municipal Corporation of Delhi (MCD) school in Phase III, Matiala (Dwarka sector 3). Men purchase liquor there and drink in open since morning when the shop opens till late night and create nuisance for passers-by. Some get so drunk that they undress themselves in front of girl students and use filthy language for them.

"We are sitting here on agitation for last 7 days. The school is just at a distance of 60-70 meters in front of this shop. We made a complaint with the police on 2nd February when we submitted an application to do an indefinite agitation till this shop is closed. The former school principal had also given many applications to the authorities but nothing happened," said Neelima, a woman agitator while speaking to IndiaTomorrow.net over the phone.

The Excise Dept of Delhi government has already set norms that "No liquor shop for consumption off the premises shall be located within a distance of 75 metres from the following, namely: Major educational institutions, Religious Places, Hospitals with fifty beds and above."

"Alcohol consumption should be banned and this shop should be shifted somewhere else," Neelima demanded.

She alleged that rather than acting on their complaint, the police is asking them to end protest.

"Police is also threatening and asking us to move from here," she alleged.

However, the women are braving the odds and have ensured for past seven days that the wine shop remained closed.

Most of the agitating women are domestic workers from the nearby apartments. Since their husbands also consume alcohol, they have to face domestic violence too. Therefore, they are demanding that the government should remove the wine shop from the locality.

"We want that this wine shop should be closed as it is located in front of a school. Our children go to school to study and we go to work. Men here drink and create trouble. They use abusive language," some women said.

Due to this unsafe atmosphere, some girls as young as 8-10 years have faced aborted abduction attempts too.

Leena Dabiru, a local resident and rights activist, claims that incidence of domestic violence has increased in the area over the time.

"Due to this, domestic violence has increased in the area. Some attempts have been made to abduct girls. Drug addiction has also increased among child rag-pickers. They come early morning to collect empty bottles. They sometimes find left-over liquor in them and drink it. These rag pickers have got so addicted that they have to now buy drugs," said Leena.

"When we approached the police they closed the shop just for two days but have since disappeared. Police is totally insensitive in this matter. All the shopkeepers in the adjacent market also want closure of the wine shop," she said.