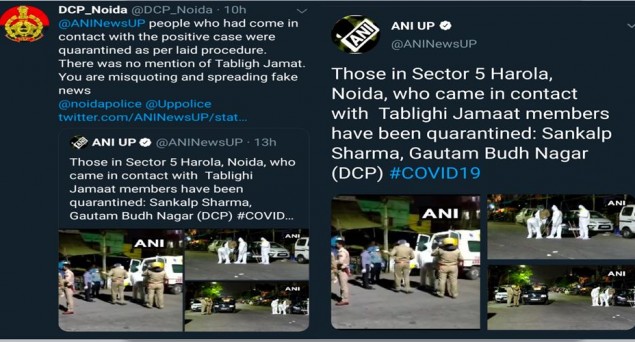 NEW DELHI, APRIL 8—The process of spreading misleading news related to Tablighi group by a section of media is still going on. The role of prominent news agency Asian News International (ANI) has now become public. Many of those media houses who stand for the promotion of fake news have been caught by the efforts of the campaign of Uttar Pradesh Police against fake news.

On Tuesday, the news agency ANI connected the news related to the Quarantine Centre of Noida to the Tablighi Jamaat and the news was retweeted by many big journalists targeting the Islamic organisation.

The ANI news agency tweeted the news related to the people who were quarantined in Harola of Noida Sector 5 on Tuesday at 10.27 pm. The tweet claimed that DCP Gautam Buddha Nagar, Sankalp Sharma, said those who came in contact with Tablighi Jamaat have been quarantined.

The official twitter handle of DCP Noida at 1.10 am, tagging the report of ANI tweeted: "People who had come in contact with the Corona positive case were quarantined as per the laid procedure.There was no mention of Tablighi Jamaat. You are misquoting and spreading fake news".

It is still unknown why a big news agency like ANI needed to make fake news related to Tablighi Jamaat, quoting the DCP Noida. The truth would not have been revealed if the Noida DCP had not explained the fraudulent nature of the news. This would have increased the hatred towards the people associated with the Tablighi Jamaat.

Thanks to the campaign being run by the Uttar Pradesh police against fake news, a lot of viral news related to Tablighi Jamaat has been dismissed as baseless in the recent past too.

A few days ago, a piece of fake news related to the behaviour of the people of Tablighi Jamaat in the Quarantine Center was spread which was denied by the Uttar Pradesh police.

The news was prominently published by Hindi newspapers and circulated in Saharanpur, Bijnor and Firozabad. Taking cognizance of such news, Saharanpur police investigated and denied all such news being spread by the media as baseless.

In connection with fake news related to Tablighi Jamaat, Saharanpur police said: "It is to be informed that news was being published in various newspapers, news channels, and social media platforms that  quarantined Jamaatians defecated in the open as they did not get non-veg food. Instructions were given to the station in-charge, Rampur Maniharan, to investigate and take necessary action. It was found that the said news being published and aired on news channels and social media platforms are completely false and untrue. Therefore, Saharanpur police completely refute the above-published news."

People on social media have different reactions to the fake news factory. Some are holding the Tablighi Jamaat responsible for the corona and some are calling it an attack on Muslims by the media on the pretext of Tablighi Jamaat.

In this entire episode, the role of the police is being appreciated in social media. These days the social media cell of the Uttar Pradesh police is very active and is immediately taking cognizance of any fake news or inflammatory post.