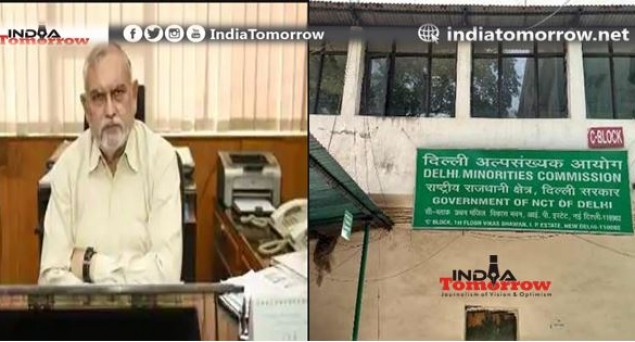 NEW DELHI, JULY 18 – The Delhi Minorities Commission’s interview-based survey report, Socio-Economic and Educational Status of Muslim Women in North-East Delhi, released on Thursday confirmed that social problem of triple talaq and polygamy do not exist in the Muslim community.

The report was released by Minorities Commission chairman Dr Zafrul Islam Khan in presence of its members Kartar Singh Kochar and Ms Anastasia Gill at its headquarters.

Explaining the socio-economic and educational status of Muslim women in Northeast Delhi, the report highlighted that survey team found no trace of triple talaq in the area. All respondents were unanimous that instant triple talaq is not found at all among Muslims. Same is the case of polygamy. The survey shows that all the married women are in monogamous marriage. “This makes clear that triple talaq and polygamy are not common in Muslims. This is just propaganda”, report said.

Instead, the survey says that polygamy is more prevalent across India among non-Muslims.

The survey pointed that Muslim women are well aware of their rights and duties. Ninety three per cent of the women contacted during survey said that they were aware of the Supreme Court’s verdict in August 2017 on Triple talaq. They welcomed the verdict.

According to the report, socio economic condition of the Muslim women has improved in their localities during the past few years. All girls go to school and have better education than previous time and their thinking has also changed.

The report pointed out that law and order has deteriorated in North East Delhi following riots that discourages girls going to schools located at large distance.  Parents prefer neighbourhood schools. As they fear for their girls security. There is a need to control the law and order in the area. Local government needs to build more amenities including schools, playgrounds and transport facilities.

According to the report, there is abnormal gender disparity in this area as in 65.3 per cent cases studied, there was only one adult female in the family. Seventy one household, out of 600, reported that they had no adult male.

The report has also pointed out that there is high unemployment among Muslim women in the area as only 9.2 per cent of the respondents stated to be currently working. They are working for a meagre salary well below the minimum wages. Muslim women moving towards empowerment as 31.8 per cent women own property.

The report said that Muslim women are weak in education. Only 1.3 per cent women in the area are post-graduate while 8.7 per cent are graduate. Majority of them are studied at government schools. More than 32 per cent women had Hindi medium education while 21 per cent had English medium. Poor financial condition was the main reason for education in Muslim women.