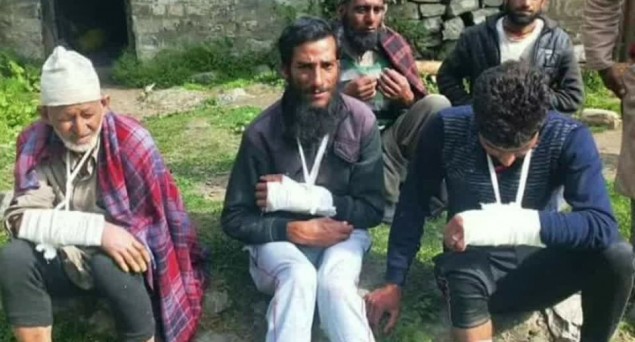 SRINAGAR, APRIL 14—Six labourers from the Chenab Valley were seriously injured when a group of youth stormed their residential quarters and attacked them with iron rods and sticks at Pundo-Barote in Himachal Pradesh.

The incident occurred at 10.30 pm on Sunday when nine labourers, working with a tower transmission company, were retiring for the day. Three people barged into the quarter and segregated young and elderly laborers.   Sources said they first thrashed youth and then targeted the older ones.

Three labourers suffered fractures while three others escaped with wounds. Some of the injured labourers were identified as Mohammad Akram, Mohammad Idrees, and Mohammad Rafiq.

Police sources said the laborers were hired by the company in November last year. The company had also provided them accommodation.

The attack created a furore on social media with netizens petitioning the authorities seeking justice for the poor labourers.

“Some goons attacked Muslim labourers from J&K who were stranded in Pundo-Barote, HP. These workers are away from home, distressed. This all is happening because of Godi Media's hate across the country. Shame on you @rahulkanwal @sudhirchaudhary #COVID2019,” tweeted Guftar Ahmad, a social activist.

Sub-divisional Magistrate, Sarkaghat in Himachal Pradesh, Zaffar Iqbal, later tweeted that three people have been arrested and a case registered.

Sub-divisional Police Officer Madan Kant Sharma said they are investigating the matter. “We have seized the car. We have shifted the injured labourers to the hospital. All labourers were discharged after treatment. They have been shifted to a safe place. Culprits will be brought to justice”, he said.