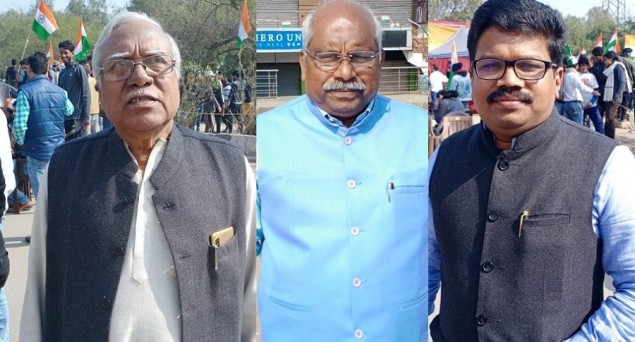 NEW DELHI, FEBRUARY 02— Senior leaders and MPs of CPI-M reached Delhi’s Shaheen Bagh area on Sunday, day after the firing incident, to express their solidarity with the anti-CAA/NRC protest going on here for the last one and half months.

CPI-M’s Rajya Sabha MPs K Somaprasad and KK Ragesh and CPI-M’s senior leader and politburo member Hannan Mollah were there along with hundreds of people including social and human rights activists. They had come to support Shaheen Bagh after news came that some Hindu Sena is coming to attack Shaheen Bagh protest.

India Tomorrow talked to them to get their views about the Shaheen Bagh protest.

“We have come here to declare our sincere support to this Shaheen Bagh movement because this is to maintain democracy and secularism in India. Every Indian who believes in secularism and democracy and who wants a stable India should support this struggle,” said CPI-M’s Rajya Sabha MP from Kerala K Somaprasad.

He said that a saffron outfit Hindu Sena had announced yesterday to march towards Shaheen Bagh to disturb it, so he and other MPs have come to support Shaheen Bagh.

CPI-M’s Rajya Sabha MP KK Ragesh said: “I came here to support this Shaheen Bagh agitation. Every citizen of our country has fundamental right to assemble but here the BJP goons and Hindutva forces are saying that they won’t allow this protest. Protest is part of our democratic right. But they want to infringe that right.

CPI-M’s politburo member and General Secretary, All India Kisan Sabha Hannan Mollah said: “We have come here to support the movement of Shaheen Bagh because RSS-BJP are conspiring to divide the people in the name of caste and creed. If they will do Hindu-Muslim and provoke riots, then the farmers of the country will also get divided, which will damage the farmers’ movement.”

“They are trying to end the right to protest and dissent. Shaheen Bagh has become symbol of the movement for Constitution. We support this movement,” he said.

When these MPs were talking to India Tomorrow, scores of CAA supporters had gathered around 150 meters from the Shaheen Bagh protest site and were raising inflammatory slogans.

Sensing the growing tension, the Delhi Police deployed its personnel in large number besides paramilitary forces to control the situation. There is a distance of about 150 meters between the two protesting camps -- security personnel are deployed in this area. They have stopped the CAA supporters from marching further towards the Shaheen Bagh protest site.

Around 4 PM on Saturday, a young gunman had opened fire at Shaheen Bagh protest site. He identified himself as Kapil Gurjar. He was overpowered by the protesters and later taken away by the Police. None was injured in the firing.

The Shaheen Bagh shooter was chanting 'Jai Shri Ram' when he was being detained. When someone asked him why he fired, he said: "Is Desh Mein Sirf Hinduon Ki Chalegi, Kisi Aur Ki Nahi" (Only Hindus will decide things in this country, none else).

The incident took place just two days after a Hindu-right youngster fired at peaceful anti-CAA protest near Jamia Millia Islamia. One student was injured in the firing.

Thousands of people, mostly women, are protesting against CAA-NRC-NPR at Shaheen Bagh for the past one and half months.