Home > After Outrage, Bihar Law College Restores Its Name in Urdu on Entrance

After Outrage, Bihar Law College Restores Its Name in Urdu on Entrance 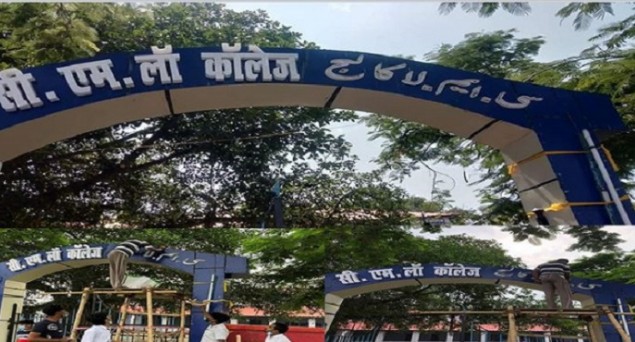 C.M. Law College in Darbhanga, Bihar restored its name in Urdu on the main entrance on May 21, 2020

PATNA, MAY 22— A law college in Bihar’s Darbhanga district on Thursday reinstalled its name in Urdu on its main entrance after facing outrage by Urdu lovers on social media. The C.M. Law College had removed the Urdu name on Monday allegedly under pressure from its students union currently ruled by a saffron student outfit.

Till May 13, the name of the college on the main entrance was only in Hindi. On May 14, the name in Urdu was also erected on the board along with Hindi. Some Maithili students groups objected to it. Later the students union made it a big issue. Succumbing to the pressure, the college authorities removed the Urdu name. However, this rollback led to outrage among Urdu lovers and students. On social media, several journalists and Urdu lovers raised the issue and demanded Chief Minister Nitish Kumar to intervene as Urdu is the second official language of the state.

On May 21, the Vice Chancellor of L.N. Mithila University of which this college is a constituent unit, issued an order to the college authorities asking them to restore the Urdu name.

“Putting to rest the controversy erupted over writing the name, VC Prof. Rajesh Singh has granted permission to write the name in Urdu on the board. In this regard, the college administration has issued direction. It is hoped this will be done today May 21,” said Prof. Badre Alam, Principal of the law college, in a media statement.

SIO Darbhanga district president Amanullah and BYO Darbhanga secretary Abdul Malik had, in a joint statement, had criticized the college administration and right-wing students groups over removal of Urdu name.

However, talking to India Tomorrow, C.M. Law College students union president Kunal Kumar Gupta, who is close to ABVP, had said: “We respect all languages and we have not protested against the language.”